DO NOT PLAY VIDEO if you are not comfortable watching images that depict extreme violence, bloodshed and death, or if you are not 18 years old or older.

While most of us were enjoying the weekend, on Jult 11tj, a breaking news flooded social media and TV channels, THE CUBAN PEOPLE broke a long lasting silence of more than 60 years and stormed the streets of Cuba demanding FREEDOM. The protests started simultaneously at different locations throughout the island and lasted three consecutive days.

Although the Cuban regime has used police and paramilitary forces to stop ruthlessly the protests, still on the following days some small and isolated protests had occurred.

July 11th, 2021 – The Cuban people protested on 45 different locations across the main island. Protestors demanded FREEDOM and the complete removal of the actual government and the ruling communist party.

Why we are reaching to you?

Protestors on the streets and Cuban people in general were surprised to know that the Cuban regime has spent millions of dollars buying gear for repressive armed forces instead of buying much needed food and medicines.

As you have seen on the video atop, Cuban regime have used deadly force in an attempt to silence the will of the Cuban people to completely remove from power the dictatorship and seek FREEDOM.

YES… CUBAN PEOPLE SEEK AND ASK FOR FREEDOM, they are not asking for much needed food or medicines, they are asking for FREEDOM.

During the protests and in the following days Cuban regime made hundreds of arrests, as a result Cubans have a growing concern about unaccounted people dead. Clicking on the image will take you to a list of more than 600 hundred names of people disappeared during and after the protests. The list grows by date and also includes the names of people arrested that are nowhere to be found.

In other words: THE CUBAN REGIME IS ILLEGAL. In an effort to hide its illegality the Cuban regime had imposed by force a Constitution that set the Communist Party as the ruling force, on top of the state. Castro’s Constitution didn’t have a constituent assembly and was written in secret by a few members of the ruling communist party.

How you can HELP CUBA?

Historically (more than 60 years) “The Cuban Case” have not been well explained enough to the American people. The media have even cheered Castro while politicians turned a blind eye to the reality of what really happened in Cuba.

Most politicians in Washington have fallen into the trap set by the Cuban regime which blames the occurrence of all these protests to a Sanitary Crisis due to COVID-19 and the difficulties created by the American Blockade (Embargo).

All of these explain why some politicians are asking to end the embargo, while others are calling to send humanitarian help or donations, or impose meaningless sanctions on top Cuban officials. All Cuban officials have Sovereign Immunity due to the recognition USA have given to Cuba since 1959.

The actions taken by President Joe Biden are insufficient and unnecessary at first, and so are all of the other things politicians are asking. Why?… Because the Cuban people are not asking for more food, medicines, vaccines, donations or anything else, THEY ARE ASKING FOR FREEDOM.

As you have learned in here the Cuban regime politics for more than 60 years have been deceiving, hiding in plain sight the violation of the Cuban Constitution of 1940, restoring this Constitution will solve all the consequences politicians are trying to patch. That is all the Cuban people need to finally get FREEDOM.

To move forward the much needed demand for FREEDOM of the Cuban people, we’d like to ask for your HELP by:

That’s all that Cuban people need, and we, as a whole nation will be always grateful for your help and support.

By taking ACTION you will also HELP CUBA to:

What else can you do?

The HEL CUBA campaign started with a simple QR Code placed on the back of a truck trailer, so if you want to participate and further spread this campaign, all you have to do is to print out that QR Code and place it on the back of your truck trailer, the trunk of your car, on the front door of your business, or whatever you think it will catch more attention.

The QR Code can be printed on any local Office Depot and or order online. To order just follow these single steps:

The price varies according to the size of the printed QR. Price also includes shipping. The order will be completely fulfilled within 5-7 days.

Leave us a comment with any idea, suggestion or feedback that help us to improve the reach of this campaign. 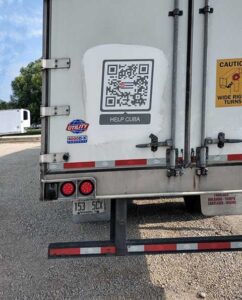